Awards veteran Paul Boyle of Boghall Butchers said winning the best Beefburger in Scotland title was "an award worth waiting for".
"We were runners-up for the title eight years ago and that we set our mind to going one better in the future," said the owner of the popular family business. "We`ve tweaked the recipe for this steak burger slightly over the years and now it's like we`ve got it good .
"We`re absolutely thrilled to achieve this top standing and it`s a true feather in the cap of everyone involved at Boghall Butchers." 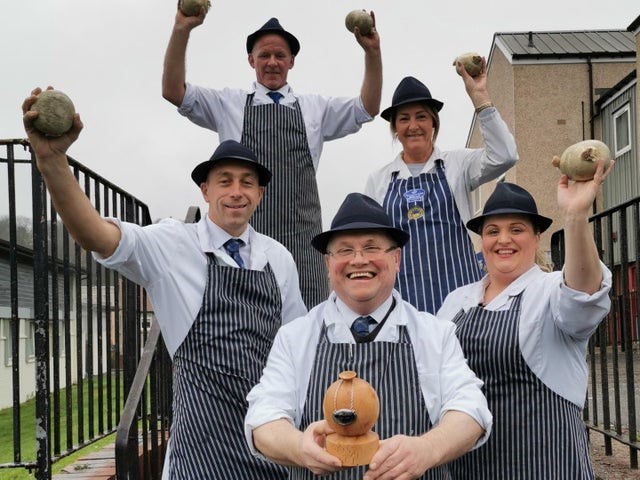 Haggis hunters from around the world gathered at Oban Distillery to taste and judge first-hand entries to the public vote.Boghall Butchers beat competition from Crombie's in Edinburgh and Anderson Quality Butchers in North Berwick to claim the prize. 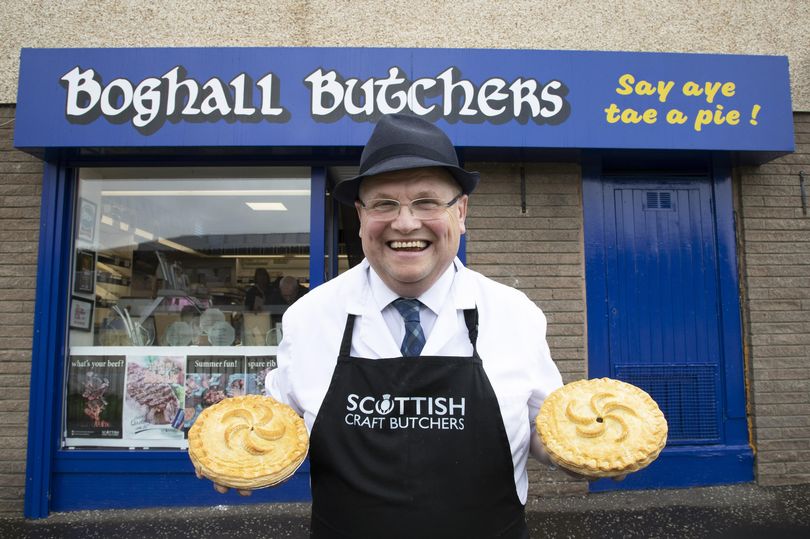 BEST PIE'S IN THE LAND!

Delighted owner of Boghall Butcher, Paul Boyle, who develops all the recipes, revealed that the winning pastry was based on a 35-year-old favourite family recipe. He said: “We lifted a Gold Award for our Mince Rounds two years ago so gave the recipe a slight tweak to improve it in response to judges’ feedback. It seems they knew what they were talking about.”

With your votes, we just won the 'Best Butchers in Scotland' title at the Scotlands Business awards 2019

We did well at this years World Scotch Pie Championships. Here's a quick run down of what we won. 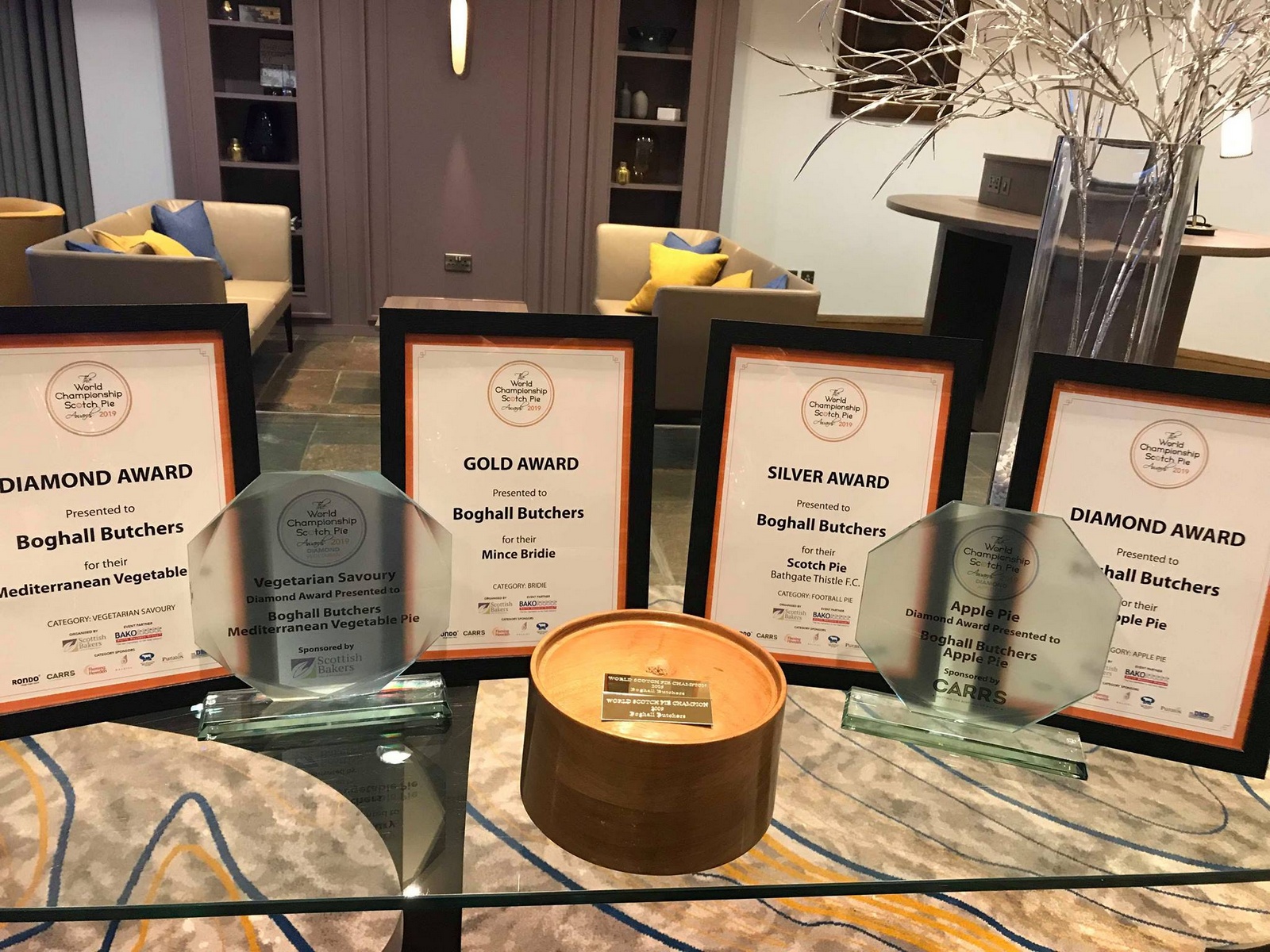 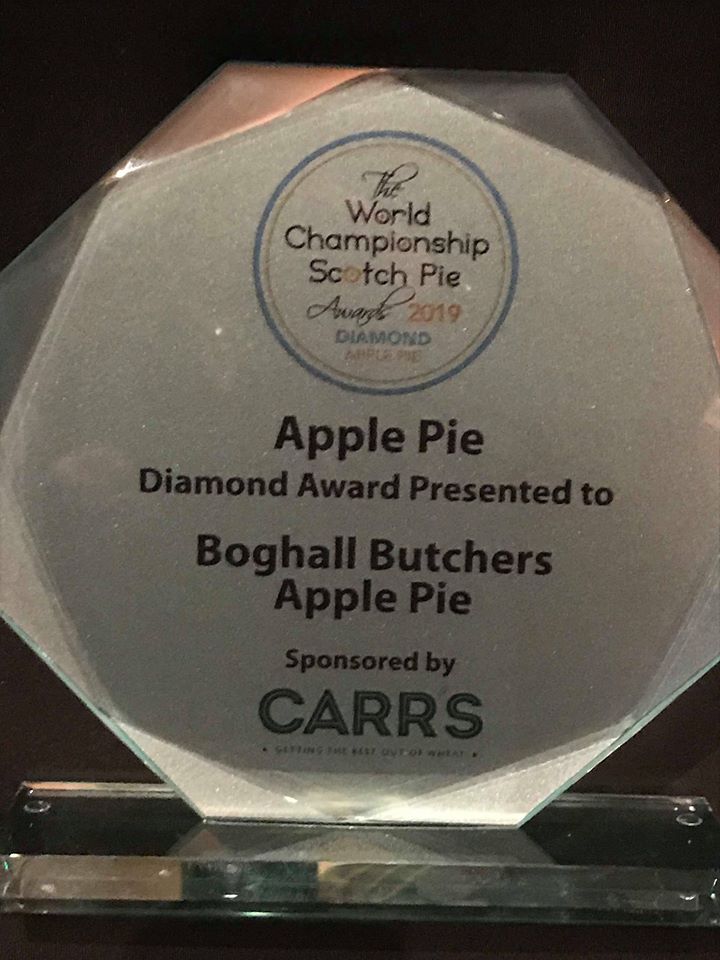 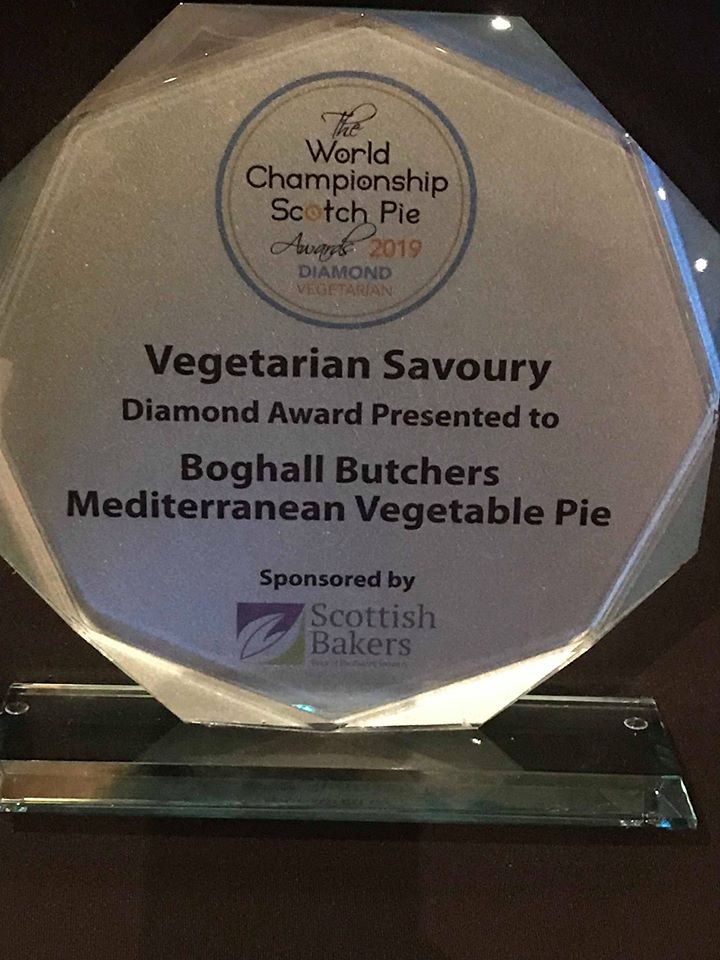 Scottish Butcher shop Of the year 2015 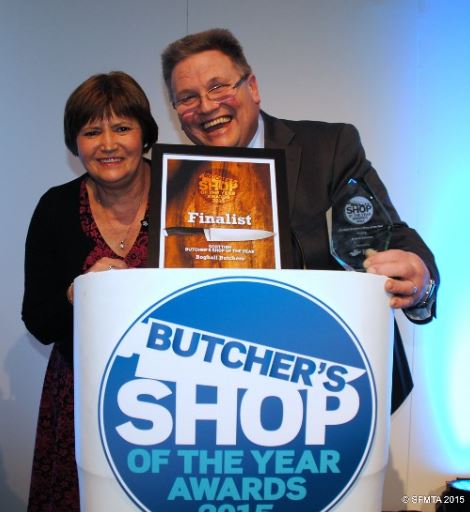 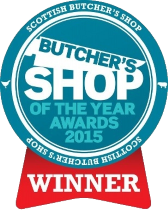 Paul and Christine Boyle were at the Aspire in Leeds to receive the trophy from Graeme Sharp from the Scotch Butchers Club. After previous attempts at the title, Paul said "I thought this day would never ever come". He went on to praise both his staff and customers for taking him to the most coveted title in the Scottish retail meat trade.

The Pork Sausages from Boghall Butchers, have been judged the best in the South East of Scotland. In a competition run by the Scottish Federation of Meat Traders that attracted over 100 entries, their pork sausages were selected as the best in their region, but then after going head to head with the other four Regional Champions was pipped at the post by the East Scotland champion, Tom Courts Quality Foods.
Speaking after the final held on Sunday 12th May at the Scottish Meat Trade Fair in Perth, Ian Faulds, President, Scottish Federation of Meat Traders said:-.“All Craft Butchers believe they have the tastes and flavours to entice their customers back but this recognition in a national competition is very special. It is a good time to be a butcher and a good time to drop into Boghall for their latest awarded winning pork sausages. ”Following on closely to Boghall Butchers success at last month’s British Pie Awards and the 2013 Craft Butcher Awards, Paul Boyle and his wife, Christine have now picked up no fewer than thirteen major awards in the last fortnight for their pies and meat products.

The first ever Scotch Pie Club Awards champion Apple Pie is Paul Boyle from Boghall butchers in West Lothian. When the category was added to the 2014 awards Paul was keen to avoid being pipped at the post as had happened to him in 2011 in the SFMTA Sweet Products evaluation held at Strichen Community Park. That involved a 335 mile round trip as Paul insisted on delivering his product in as perfect a condition as possible:- "We went up there and got 99% for our apple pie but were beaten by Alan Stuart (Stuarts of Buckhaven) who got 100%. We said 'how can we do that?' "We have worked on introducing butter into the pastry and looked at different varieties of apples. Now we are fixed on a Bramley apple done in brown sugar instead of caster sugar. We have introduced some soft brown sugar into our pastry and that makes a nice crisp pastry. The filling has been good and I attended one of Robert Ross' pastry courses where he made an apple pie from scratch. I paid particular attention to the filling to what he did with the filling - half sliced and half apple puree. That is what we do and it has paid dividends with this win. "Being a new category, I was absolutely delighted that butchers won it because apple pies are a massive thing in the bakery industry, it is the next thing to a scotch pie in significance so to win that I was delighted." Paul claimed that the whole community in Boghall had taken an interest in how the apple pie would do when the results were revealed:- "The customers have been asking over the last few days when the results were coming out. The type of community that it is will mean they will share our delight. "I don't know how we will keep up with the supply but we said that about the scotch pie many years ago and we managed then so we will do the same with the apple pie." The two times World Scotch Pie Champion (2005 & 2009) served warning that his focus next time would be back on the Scotch Pie. The diamond for apple pie was just one of seven awards for Boghall Butchers who also won prizes for sausage rolls, bridies, steak pies, fish and cold savouries. Their Scotch Pie won bronze and for anyone else that might have been a great result but standards and pride are high in Boghall and Paul said that is where the emphasis would be for next year. 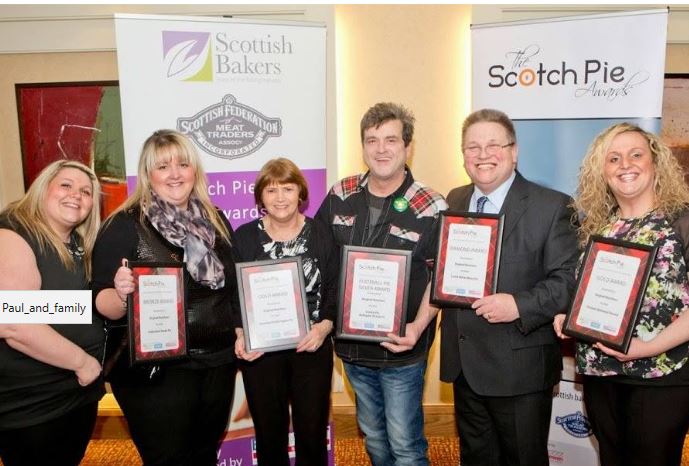 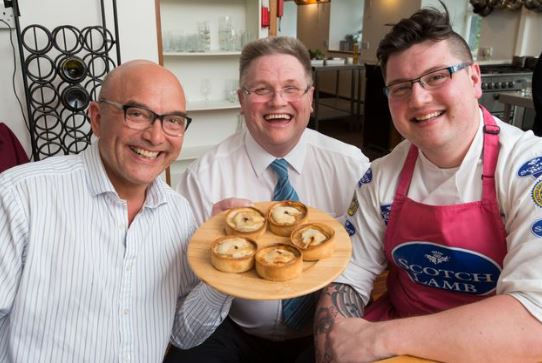 
A West Lothian butcher, who prides himself on the quality of his meat and award-winning pies, joined Masterchef presenter Gregg Wallace this week to urge consumers to make the most of the versatility and simplicity of cooking Scotch Lamb PGI.
Paul Boyle and his wife Christine, who own Boghall Butchers, are members of Quality Meat Scotland’s Scotch Butchers Club and employ 11 staff in their shop in Boghall. The couple provide a traditional, quality service whilst capitalising on new opportunities, including developing a range of innovative products, most recently a Scotch Lamb en croute.Following his business matra of “Say aye tae a pie”, Mr Boyle presented Mr Wallace with a tray of his legendary Scotch Lamb pies, made from locally-sourced Scotch Lamb.“Scotch Lamb is a firm favourite of ours and we have loads of great recipes and suggestions which we share with our customers on a daily basis,” said Mr Boyle.“With the right cut of Scotch Lamb and a little preparation, customers can have food on the table in a matter of minutes.”Mr Wallace said there was huge scope for many more people to routinely enjoy Scotch Lamb, particularly at this time of year when it is at its most plentiful.“Lamb had always been my personal favourite and there is real potential for lots more of us to be making the most of this natural, easy-to-cook product which is bursting with flavour and such a great ingredient for a whole range of quick, tasty dishes,” said Mr Wallace. 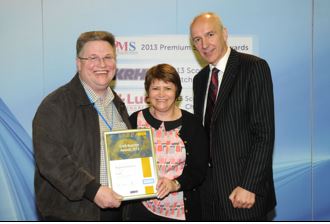